Overnight the sett has a new entrance – or rather, an old hole that has been opened up, on the short side of the fence: 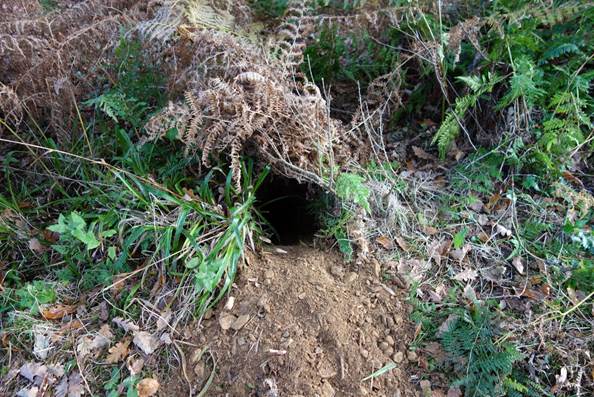 The original hole was quite hidden by vegetation. There were no other new diggings visible. I moved the camera inside the enclosure and got about 60 video clips overnight.

One of the badgers came out at 19:40 and was out for quite a long time before the other emerged, after at least one false start -- it was definitely a bit more nervous. It looks as if the early bird may have got the food from both dishes (can one badger scoff two quails – feathers, beaks and all, plus a tin of cat food, plus peanuts?). The dishes were ignored for a couple of hours and there’s video of food being taken from only one dish, but the plank appears to have been knocked off the second dish before the 2nd badger emerged. If It emerged from the other entrance and approached the dish from the other side… it might have managed to eat without triggering the camera (it’s not fantastically sensitive; the recording of the first meal begins with the rock and plank already off the dish).

I threw in about half a dozen handfuls of acorns during the day and it looked as if some were eaten by the second badger to emerge (at least, something that might have been acorns were eaten), but certainly not all and none from one place where I positioned a few to see if they’d disappear. Will put some in with peanuts tonight and try to get them eating them. There some uneaten pieces of apple left over, which hopefully means the loser, if there was a loser, in the dish department, didn’t go to bed hungry.

The main news is that at about 1AM they started playing. Indeed, they had great time, like children playing games of tag and hide and seek, chasing each other in and out of the sett. Also a little peek-a-boo, pretending not to see each other then rushing together or freezing behind a tree. At one point it looked like a case of I seeeee you as each of them looked into opposite ends of the corrugated plastic pipe that holds up the board over the sett. Very frisky and very funny. I’m not sure I’ve seen such big badgers playing like this before, but it may be that it feels like that because there weren’t parents around to compare them to for size.

Apart from the games they have spent time doing a lot of very slow exploring with their noses. One rolled on its back mostly off camera at one point after a quick scratch; one stood up to smell something on a tree. Apart from that it was all very slow, methodical, seemingly very relaxed searching for things to eat -- we should bury some food here and there –- with no visible impression of captivity.