Many weeks have passed since a badger set foot in our end of the woods. Indeed, it's been long enough that I switched the cameras from video to photo to save wasting batteries on the comings and goings of feral cats and foxes as well as hedgehogs, deer, mice and other passers by.

I heard, at some point in the last few weeks, of some culling of badgers about 5km away. Not ours, surely? Impossible to know for certain. We had two pass by in November and the last we saw for the year was one passing the sett on the edge of the wood on the 17th of November. 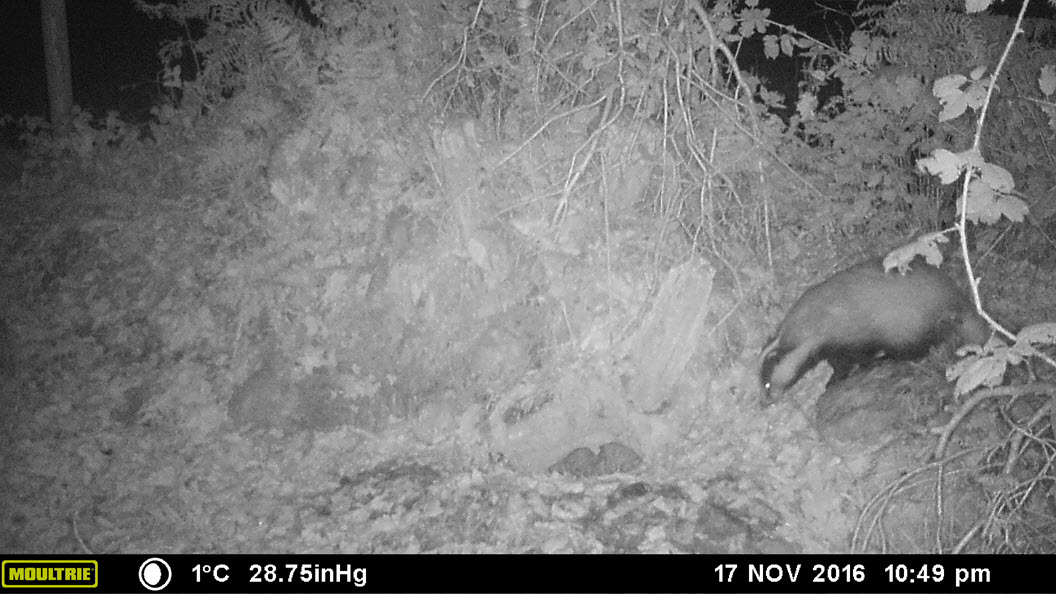 After that nothing. Culled? Killed on the road? Moved? Or just staying closer to home (foraging ranges contract, in particular for females, in winter)? All possible.

I let longer periods elapse between visits to the cameras, then just checked the nearest now and then.

Today, after reviewing many images of foxes coming and going, including one of two baring their teeth at each other, eyes blazing, that camera revealed

the first glimpse of a badger for a couple of months. A sign of spring? There was, however, no sign of any badgers on the other cameras.

The camera on the old sett (above), which I hadn't checked for ages, recorded only passing deer -- a male with horns, a female and a fawn with spots, foxes, cats, a grey squirrel, a pheasant, a wood pigeon and a mouse.

On my rounds between cameras I saw some signs of badger activity suggesting last night's visitor arrived via the road but somehow avoided the camera covering their usual entry point.