A new camera arrived in time for me to set it overnight before we left to see family on Christmas day. I tied it to a makeshift stake made by lashing three fence posts together and put it on the path outside the rear entrance to the sett. I did this because the camera has more LEDs emitting infrared light than the one that it will replace, so it can "see" further and get a long view along the path where the badgers have been playing lately (and because there wasn't a tree in the right position).

It was a cold night, leaving a frost on everything the following morning. The badgers were out between 2315 and 0300, at least.

I found the camera on its back; an inauspicious start.

Happy Christmas from the badgers!

It didn't really look as if it been knocked over by frolicing badgers so much as excavated. All it recorded was its being toppled by a curious badger.

My improvised tripod appeared to have been dug up, and it may have been partly. As the video below shows, it was given a close inspection.</font size> 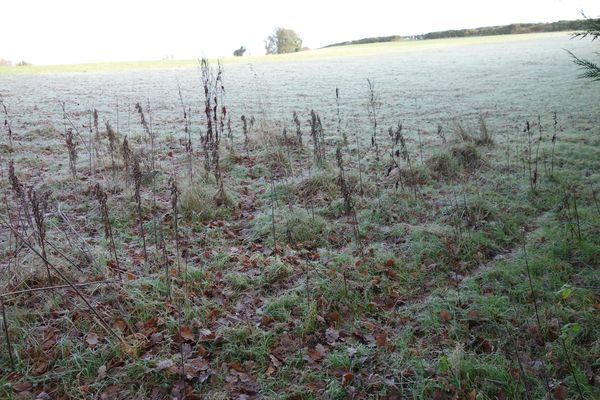 Badger track into the field.</font size> 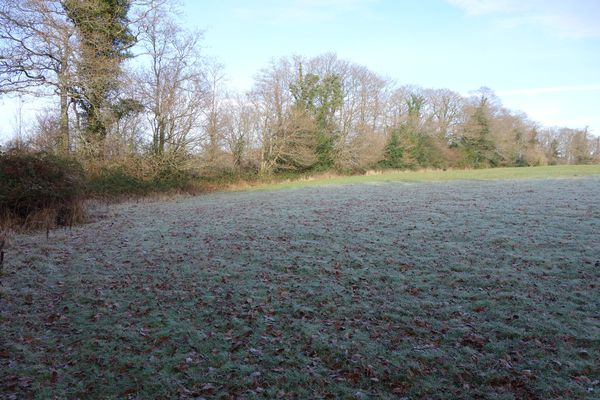 The wood on Christmas morning. "Edgewood Road" is a path along the edge of the field on the wood side, behind a bank.</font size>

My tripod substitute got short shrift from a curious badger. The first assault was from underneath -- some digging that changed the perspective. The second was decisive. The dish was placed on the path into the rest of the woods. Róisín, who got there first of course, wasn't in the mood to let Benji eat for the first 5 minutes or so -- she was more overtly competitive. He looked hopefully under the board, as usual, and did eventually get some food when Róisín wandered off for a bit. She rejoined him after a few minutes and they shared the remainder of the food companionably enough.