The badgers were given two dishes of food again, placed some distance apart. The last of the frozen quail was divided between them -- to ensure, if possible, that Benji got a look-in.

The first cover was knocked off at 18:04 (early, despite the cold) and a quail was taken away. For ages I assumed that the badger taking food back to the sett was the timorous Benji, afraid of being dispossessed. Now, I am inclined to think it may have been Róisín all along. Benji just isn't that decisive. Nor, is he particularly bright, as evidenced by his standing on a board under which he tried to look for food at one point (not that badgers are known for their intellect).

The dish closest to the sett had the cover knocked off at 18:49, apparently by Benji -- as he was pushed aside after a couple of minutes. Once again he sat on his haunches and scratched and waited. In the brief interval between two video clips Róisín disappeared and there was no sign subsequently of a quail in that dish. However, both badgers did return to the dish several times over the night (and there were no other visitors recorded), so he didn't starve. There were also plenty of signs of vigorous excavations elsewhere in the woods within 50m of the sett.

The badgers were last recorded above ground at 04:02.

The most surprising development overnight was the appearance of a new hole between the two sett entrances. It is too small to be an entrance or exit and looks more like an inadvertence, a case of a roof falling into a tunnel going too close to the surface -- in the wrong direction on a slope. 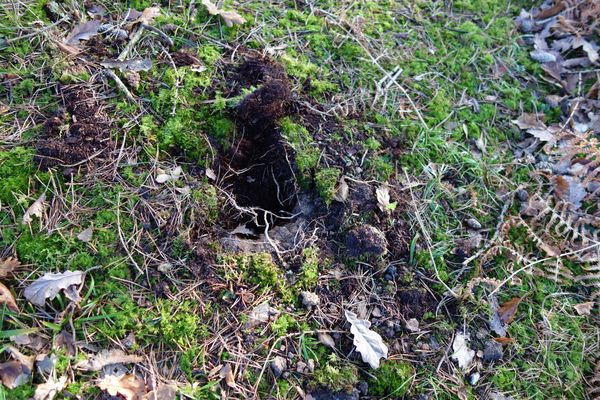 New: a hole between the existing sett entrances, looking into the end of a tunnel.</font size>

Christmas dinner number 1. Róisín takes the quail away. Two hours later Benji is joined by Róisín but she seems more interested in food than any smooches from Benji (they were quite affectionate earlier when both stood with their front paws resting on the rim of a pot of water). Christmas dinner number 2. Róisín does a runner again?