A wet night, cold but not freezing. No sign of any visitor in our neck of the woods.

I tied the camera on Edgewood Road to a large fallen branch and left it, propped in the crook of two branches, pointed at the latrine. It was pointed off to one side when I went to check on it this morning, moved by heavy winds overnight. By the time I got the chip out of the camera I had had enough of navigating under the trees with a large beach umbrella (first thing that came to hand) and getting soaked in the rain, so I passed on scrutinising the latrine. I'd have needed a a flashlight anyway, after removing the leaves.

Not much happened back at the sett. It looked like the badgers may have seen in the new year underground: the first appearance of a badger was at 2:17, however it emerged looking a bit wet so it may have been out before; the last was at 3:32, half an hour after they returned together from a trip into the woods. The camera covering the dish (just 1 again) didn't capture much there; one minute the cover was on, ten minutes later it was off (the dish was empty this morning).

Take a look at the first five seconds of the video below. The badger nearest the camera looks bigger to me. My imagination? Or

or a combination? In the remainder of the video -- another clip for comparison, same animals, same place, same time, more or less -- they don't look so different. 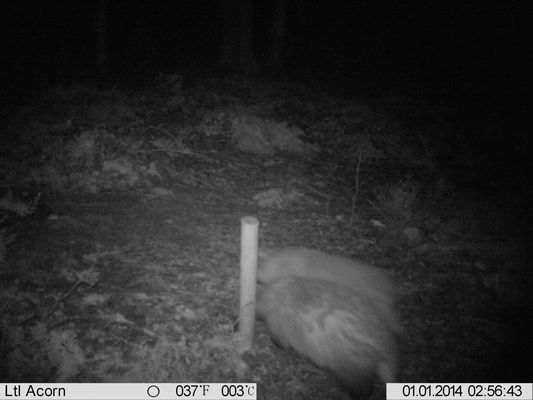 Scent marking: badgers mark their environment (sett area, paths, territory boundaries, bedding), and each other, with musk from a gland near their tail that is unique in carnivores. The scent is highly specific to an individual.